Russian investigators believe a load shift and detached door caused an Antonov An-12 freighter to lose some of its cargo of precious metals during take-off from Yakutsk.

The aircraft – operated by a carrier identified as Nimbus – had taken off at 12:50 local time on 15 March, according to the eastern Siberia transport division of the federal Investigative Committee.

It says that it was bound for Krasnoyarsk and then onwards to the Kupol gold mine in the north-east of the country.

The investigative committee says a preliminary examination points to “incorrect fixation” of the cargo.

It states that the cargo comprised ingots of precious metals totalling 9.3t, owned by a mining company in the Chukotka region.

The cargo shifted during take-off and damaged a cargo hatch, causing it to detach from the aircraft and fall to the ground. It did not strike any buildings or vehicles, and no injuries resulted.

“Part of the cargo was scattered on the runway,” says the committee, although it does not specify how much was spilled nor its value.

The An-12 diverted to Magan airfield, situated about 11km west of the main Yakutsk international airport.

Investigators have not identified the airframe involved. The committee says information is being gathered to establish the circumstances of the event. 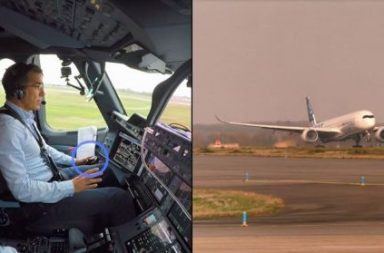